More
HomeGossipJennifer Aniston : Story about plastic surgery: What has she corrected?

The major star of «Friends» Jennifer Aniston said in interview that she had to go to plastic surgeons twice. Maybe, this is the secret of her beauty and youth? But it’s not that simple, because the actress visited specialists for another purpose. She openly spoke about those reasons to popular American magazines.

Surgery to correct a birth defect 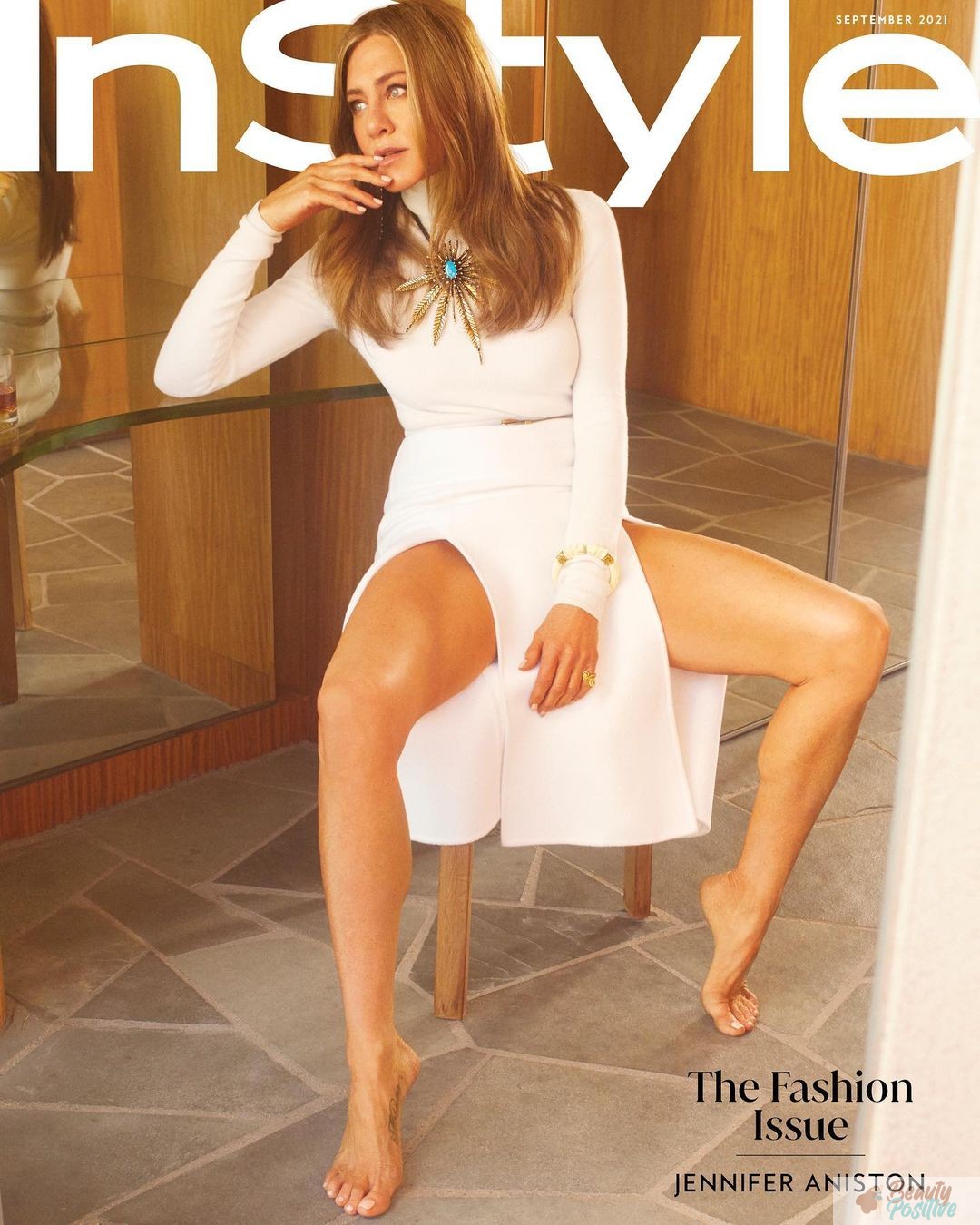 Jennifer Aniston had her first surgery back in the early 2000s. Many people believe that’s when she decided to do a rhinoplasty. But, according to her, she had only corrected a deviated nasal septum. Since childhood, she had difficulty in sleeping because of that birth defect. And now Jennifer sleeps like a baby. But her nose obviously became smaller after she’s got older. Experts think that aesthetic rhinoplasty still took place, although the actress never recognizes it.

Moreover, pictures of a young Jennifer appeared on the internet. They were published by her friend (now probably ex) actress Taylor Swift. There are two beautiful young ladies in the photo, and Aniston’s nose looks more massive than it is now. That’s why not only experts, but usual people tend to believe that the actress has reduced the width of her nose to make it narrower. By the way, it’s obvious that her new nose looks great and fits her perfectly.

Breast implants and other surgical intervention 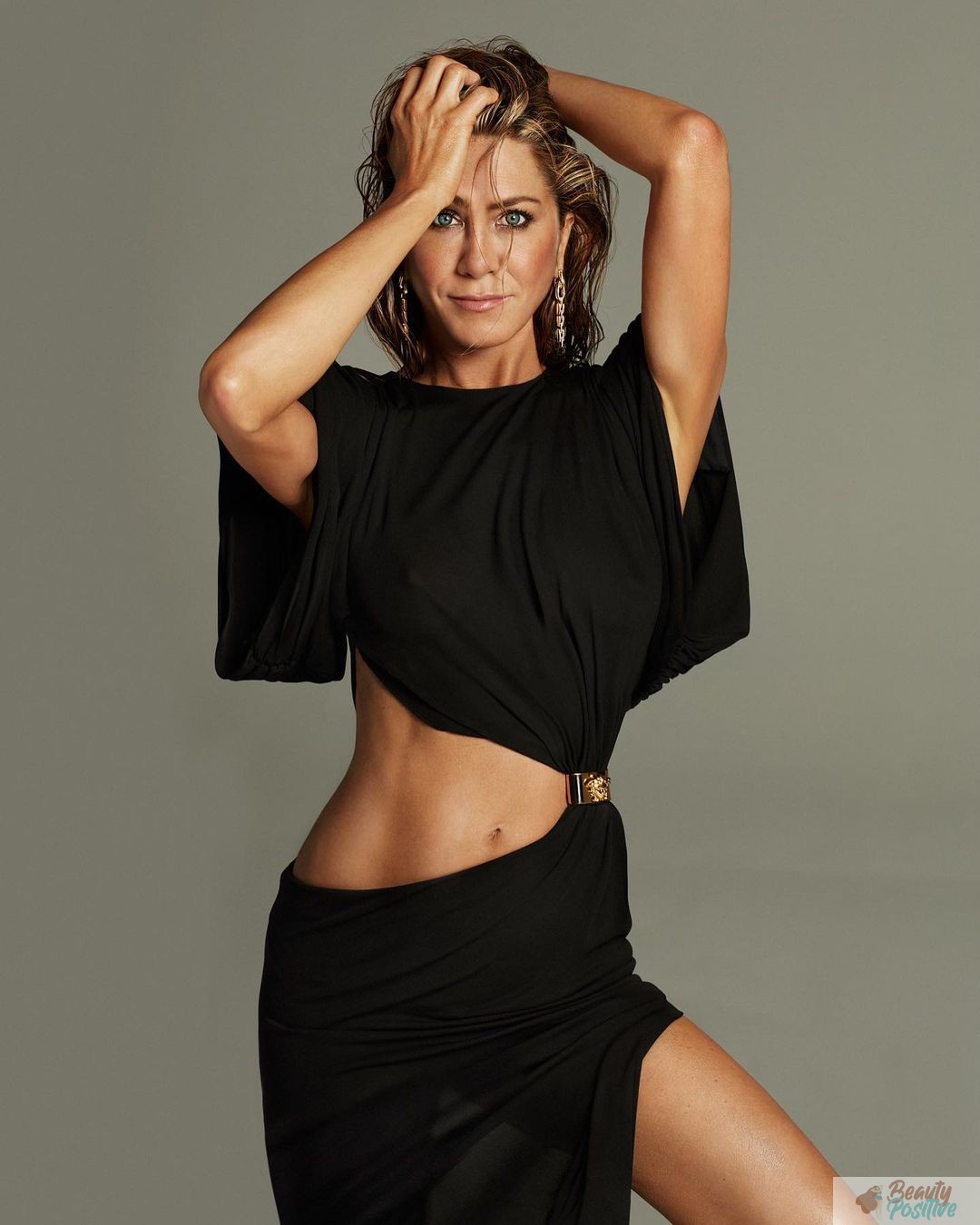 Everybody wants to know does Jennifer Aniston have breast implants or not. The actress has never been able to boast about her curves, but it does not matter for her. She is strongly against breast lift and implants anywhere. Aniston simply doesn’t need it, and says that her cool boobies and booty were inherited from Greek ancestors. The actress is satisfied with the size and shape of her breasts and never intended to make her booty bigger. She does not want to be confused with another Jennifer – Lopez. 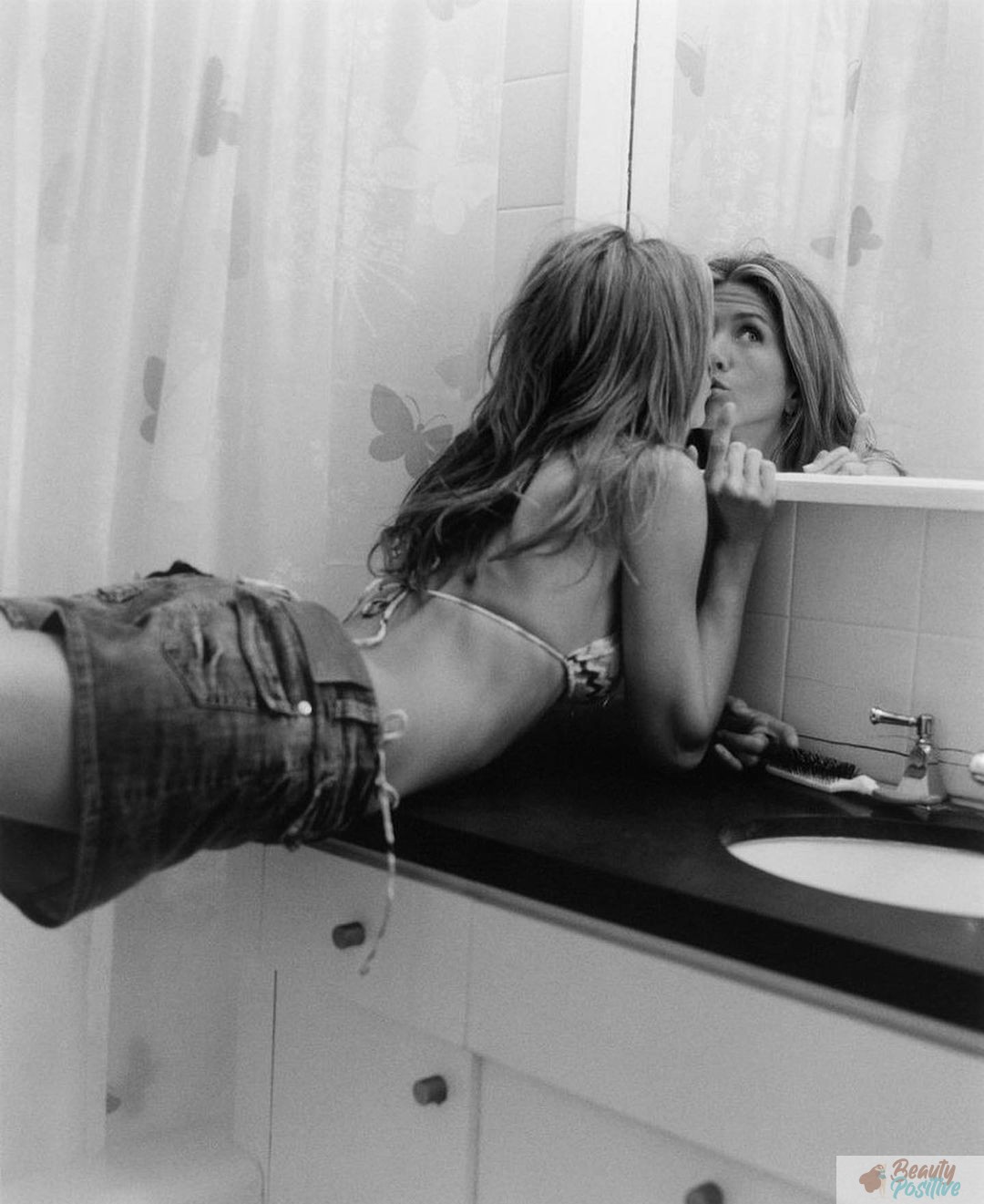 Aniston got a beautiful natural breasts, not so big but well-shaped. The actress rarely wears a bra for this very reason. Jennifer told People magazine that she is happy with what God gave her. She showed all of that in the brightest way, performing a full-fledged striptease in the movie We’re the Millers.

What about beauty injections? 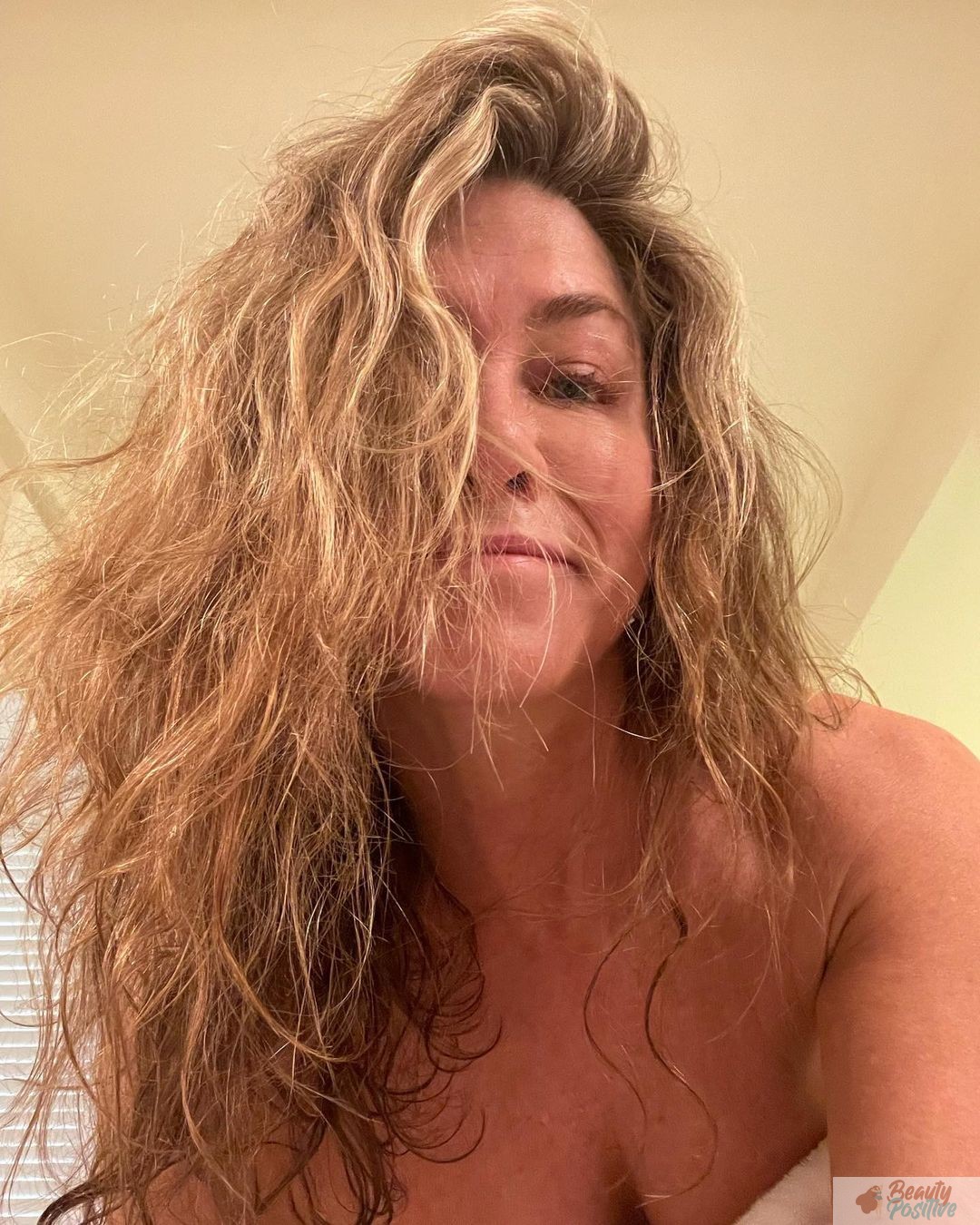 It is not a secret that Hollywood is the main consumer of beauty injections. A lot of actresses resort to this method to stay forever «young and beautiful». But not Jennifer Aniston, who prides herself that «not injecting shit into the face». She said it in the interview with fashion magazine Harper’s Bazaar Australia. The actress pities women who disfigured themselves with Botox and fillers. She believes that there is no individuality left in them, that is especially important in the profession of an actor. And besides dependence on cosmetology speaks of self-doubt and complexes. The actress also said about the stigma around aging in Hollywood. Actors have to keep «eternal youth» or they stay on the sidelines of professional life.

Aniston is not going to inject Botox, put fillers or do a circular facelift. She thinks she hit the genetic jackpot and doesn’t need more like Kim Kardashian. Sport and healthy lifestyle help the star to keep her body in perfect shape. She knows how to look 20 years younger when she is almost 54 years old. And she does it without plastic surgery and injections! Jennifer Aniston is very beautiful woman and also open, frank and straightforward person. 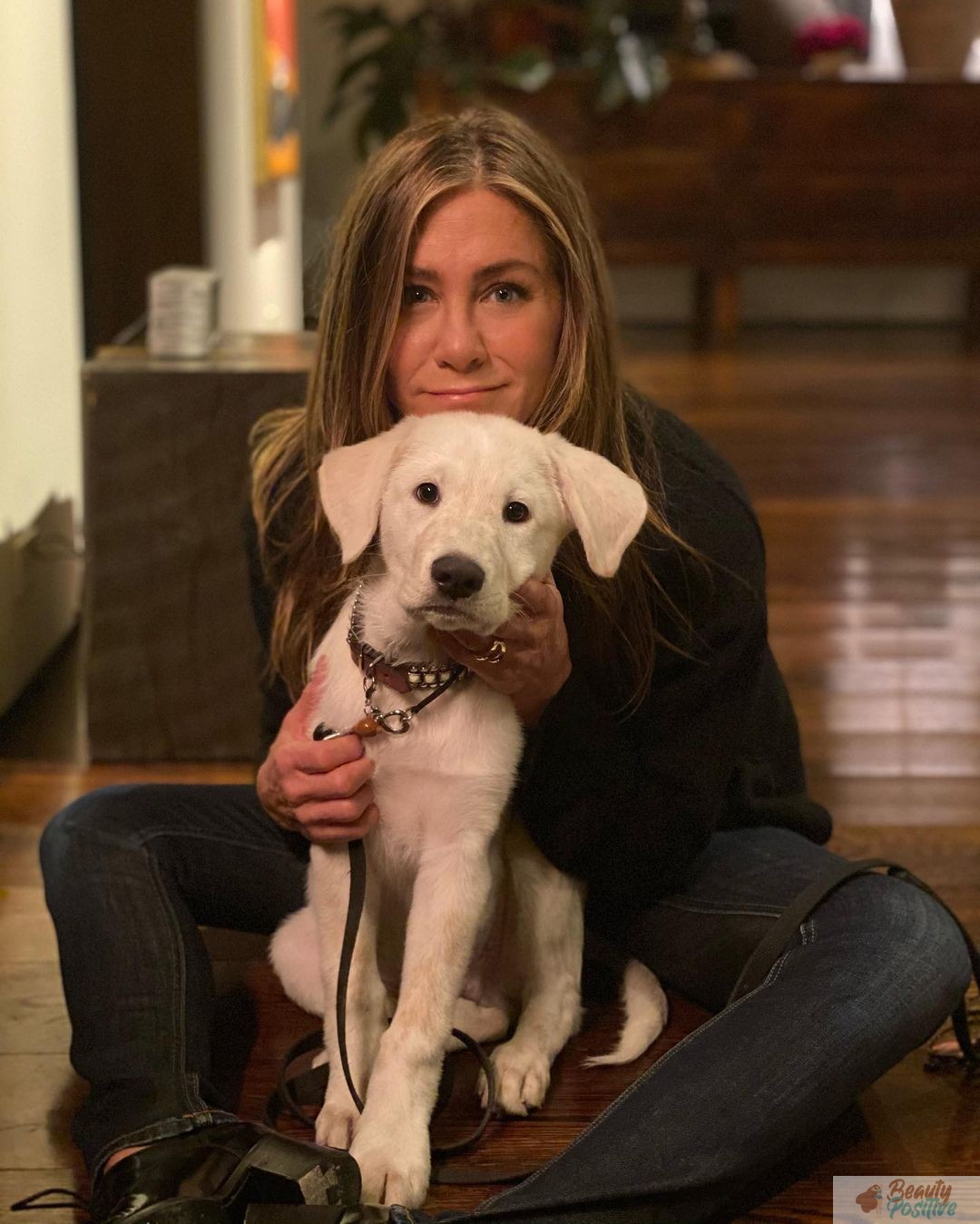 There is not everyone in Hollywood who’s ready to open up a radical opinion. That’s why the actress has been a favorite celebrity of many people for many years and it doesn’t depend on her age, roles or plastic surgery she had.

Carly Rae Jepsen is a popular singer, songwriter and actress born in Canada. She became famous after participating in the music show Canadian Idol...
Read more

Tyra Banks weight gain is her own choice

In 2019 Tyra Banks appeared on the cover of Sports Illustrated Swimsuit. Then she was in great shape. One year later former supermodel has...
Read more